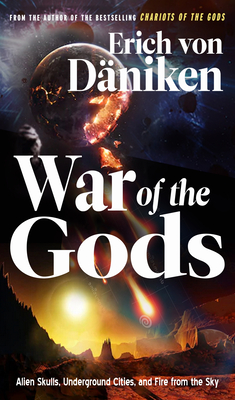 
On Our Shelves Now. Click on title for location specific availability.
Bestselling author and father of the Ancient Alien Theory Erich von Däniken explores what drove ancient humans to build city-sized places underground around the world and its connection to conflicts in the sky.

War of the Gods examines ancient scriptures from India, Siberia, Tahiti, and many other regions of the world independently on reports of battles in the stars. Weapons of unimaginable destructive power were used in the battle. Use of one of these weapons destroyed a planet completely.

Traditions from all over the world depict the gruesome effects of the battle in space. Many ancient stories speak of it raining fire from the sky for years. The people of the time tried to protect themselves from this, and thus created more testimonies that prove the star war and contact with beings from other planets.

With impressive examples von Däniken illustrates some of the numerous cities that were dug underground as safe harbors from the destructive boulders. Miles and miles of underground passageways have been discovered around the world as they made space for villages and entire cities.

To end the book, von Däniken presents his newest discoveries of an event that can only be described as shocking: In 2017, the author was informed that strange mummified creatures were found near the Peruvian village of Nazca. They lived several thousand years, had three fingers and three toes, and had exceptionally long heads. One of the mummies, apparently several thousand years ago, had been implanted with a metal plate under the skin. Scientists agree: These creatures are not from Earth!

von Däniken is arguably the most widely read and most copied nonfiction author in the world. He published his first (and best known) book, Chariots of the Gods, in 1968. The worldwide bestseller was followed by 40 more books, including the recent bestsellers The Gods Never Left Us, Eyewitness to the Gods, Twilight of the Gods, History Is Wrong, Evidence of the Gods, Remnants of the Gods, and Odyssey of the Gods. His works have been translated into 28 languages and have sold more than 65 million copies. Several have also been made into films.

Von Däniken's ideas have been the inspiration for a wide range of television series, including the History channel's hit Ancient Aliens. His research organization, the A.A.S.R.A./legendarytimes.com (Archaeology, Astronautics & SETI Research Association), comprises laymen and academics from all walks of life. Internationally, there are about 10,000. members. He lives in Switzerland but is an ever-present figure on the international lecture circuit, traveling more than 100,000 miles a year.