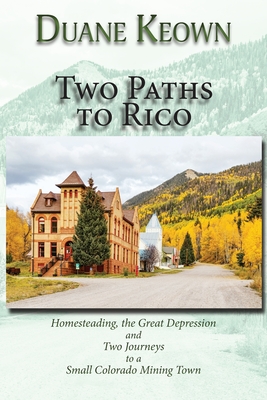 The author's granddad Thomas Keown was a man of many sorrows. His first wife died in childbirth and their daughter Sarah died young of diphtheria. Having been prosperous he went broke in Kansas, and with his second wife Mary and sons, Herald and Urban, they joined 4,000 other holders of $150 land drawing certificates August 8, 1908 at the site of the new town-to-be of Blanca, in the San Luis Valley of Colorado. The town development failed and they moved on to homestead near Dove Creek, Colorado. In Blanca, Herald and his brother became passionate baseball players. For their devout Christian mother their path was unblessed. Games were played on the holy Sabbath. As an impoverished homesteader, then a miner, Dad was elected Dolores County Treasurer. With only a tenth grade education, he said he was elected because he could "hit the ball." Meanwhile, in Thayer, Missouri, the John Gage family with six children, prepared to leave for Dove Creek. Doctors advised they move to an arid climate to save their youngest son from an early death from rheumatic fever. With belongings and six children in the back of an old truck, and camping along the road, they arrived at their desolate homestead on Halloween, 1923. The Great Depression had begun when Mom was the Peel School teacher with fifty-four students. Dad married Bernice Gage December 1, 1934 and took her to their Rico home near the Dolores County Courthouse.