Armed in America: A History of Gun Rights from Colonial Militias to Concealed Carry (Paperback) 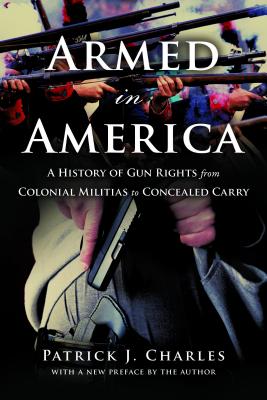 Armed in America: A History of Gun Rights from Colonial Militias to Concealed Carry (Paperback)


Special Order - Subject to availability
NOW WITH A NEW PREFACE THAT BRINGS THE FRAUGHT GUN-RIGHTS CONTROVERSY UP TO DATE
This accessible legal history describes the way in which the Second Amendment was interpreted throughout most of American history and shows that today's gun-rights advocates have drastically departed from the long-held interpretation of the right to bear arms.

This illuminating study traces the transformation of the right to arms from its inception in English and colonial American law to today's impassioned gun-control debate. As historian and legal scholar Patrick J. Charles shows, what the right to arms means to Americans, as well as what it legally protects, has changed drastically since its first appearance in the 1689 Declaration of Rights.
Armed in America explores how and why the right to arms transformed at different points in history. The right was initially meant to serve as a parliamentary right of resistance, yet by the ratification of the Second Amendment in 1791 the right had become indispensably intertwined with civic republicanism. As the United States progressed into the 19th century the right continued to change--this time away from civic republicanism and towards the individual-right understanding that is known today, albeit with the important caveat that the right could be severely restricted by the government's police power.
Throughout the 20th century this understanding of the right remained the predominant view. But working behind the scenes was the beginnings of the gun-rights movement--a movement that was started in the early 20th century through the collective efforts of sporting magazine editors and was eventually commandeered by the National Rifle Association to become the gun-rights movement known today.
Now with a new preface that brings the fraught gun-rights controversy up to date, this book is an invaluable resource for readers looking to sort through the shrill rhetoric surrounding the current gun debate and arrive at an informed understanding of the legal and historical development of the right to arms.
Patrick J. Charles is the author of Historicism, Originalism and the Constitution: The Use and Abuse of History in American Jurisprudence and The Second Amendment: The Intent and Its Interpretation by the States and the Supreme Courtas well as numerous articles in law journals. His writings on the history of the Second Amendment have been cited by Second, Fourth, Seventh, and Ninth Circuit Court of Appeals, and his book The Second Amendment was cited by Justice Stephen Breyer in the landmark Supreme Court decision McDonald v. City of Chicago. Charles currently serves as a senior historian for United States Special Operations Command, located at MacDill Air Force Base, Florida. In 2016 and 2014, Charles was awarded the Allan S. Major Award, and is the only two-time recipient of the award. The Major Award is given annually to recognize the top history program out of the over 170 wings and groups in the United States Air Force. Additionally, in 2008, Charles received the Judge John R. Brown Award for Excellence in Legal Writing. The Judge Brown award is given annually to recognize the top law school student note, article, or unpublished paper in the United States.
“REQUIRED READING FOR ANYONE INVOLVED OR INTERESTED IN THE GUN DEBATE.”
—Joseph Blocher, Professor of Law, Duke Law School

“Impeccably sourced and including useful illustrations, Armed in America delves into the complete history of American gun rights, republican virtue, and militia ideology and offers a keen critique of the NRA’s highly influential rhetoric and stance. . . .  A go-to source for facts about the Second Amendment.”
—Booklist

"Meticulous, objective, and captivating. The history of gun rights is constantly being exploited and manipulated by self-interested forces for political gain. Armed in America finally sets the record straight."
—Louis Klarevas, author of Rampage Nation: Securing America from Mass Shootings

"Others have written on the Second Amendment, but no account provides such a detailed, clear-headed, and deep analysis of the amendment's origins, construction, and interpretation, including much new history and evidence. An important, valuable, and highly readable work that does much to clarify the ongoing debate."
—Robert J. Spitzer, Distinguished Service Professor of Political Science, SUNY Cortland, author of Guns across America and The Politics of Gun Control

"Patrick Charles's historical work is already central to many areas of Second Amendment law--scholars, lawyers, and judges all rely on him. Armed in America is his most comprehensive work yet, and draws attention to some of the most fundamental disagreements, misunderstandings, and misrepresentations in the gun debate. This will be required reading for anyone involved or interested in the gun debate."
—Joseph Blocher, Professor of Law, Duke Law School

"Provides solid history that is welcome in our current political atmosphere. An evenhanded book about a controversy that will not die."
—Kirkus Reviews

"A scrupulously documented survey of gun rights and gun regulations spanning from ninth-century England to twenty-first century America. Full of fresh and surprising details, and unflinching in its analysis, Armed in America provides incisive new perspectives for any serious student of the right to keep and bear arms."
—Darrell A. H. Miller, Melvin G. Shimm Professor of Law, Duke Law School