The Last Weeks of Abraham Lincoln: A Day-By-Day Account of His Personal, Political, and Military Challenges (Paperback) 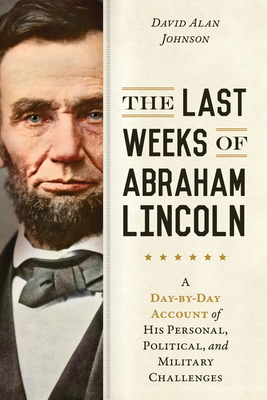 The Last Weeks of Abraham Lincoln: A Day-By-Day Account of His Personal, Political, and Military Challenges (Paperback)


On Our Shelves Now. Click on title for location specific availability.
This day-by-day account of Abraham Lincoln's last six weeks of life covers a period of extraordinary events, not only for the president himself but for the fate of the nation. From March 4 to April 15, 1865--a momentous time for the nation--Abraham Lincoln delivered his second inaugural address, supervised climatic battles leading up to the end of the Civil War, learned that Robert E. Lee had surrendered to Ulysses S. Grant at Appomattox, and finally was killed by assassin John Wilkes Booth at Ford's Theatre. Weaving an arresting narrative around the historical facts, historian David Alan Johnson brings to life the president's daily routine, as he guided the country through one of the most tumultuous periods of American history. The reader follows the president as he greets visitors at the inaugural ball, asks abolitionist Frederick Douglass's opinion of the inaugural address, confers with Generals Grant and Sherman on the final stages of the war, visits a field hospital for wounded outside City Point, Virginia, and attempts to calm his high-strung wife Mary, who appears on the verge of nervous collapse. We read excerpts from press reviews of Lincoln's second inaugural address, learn that Mrs. Lincoln's ball gown created a sensation, and are given eye-witness accounts of the celebrations and drunken revelry that broke out in Washington when the end of the war was announced. This engagingly written narrative history of a short but extremely important span of days vividly depicts the actions and thoughts of one of our greatest presidents during a time of national emergency.
David Alan Johnson is the author of thirteen books, including Yanks in the RAF: The Story of Maverick Pilots and American Volunteers Who Joined Britain's Fight in WWII; The Battle of Britain: The American Factor; and Decided on the Battlefield: Grant, Sherman, Lincoln, and the Election of 1864.