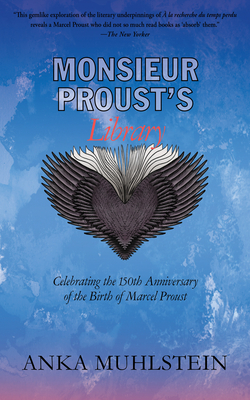 
On Our Shelves Now. Click on title for location specific availability.
CELEBRATING THE 150th ANNIVERSARY OF THE BIRTH OF MARCEL PROUST

“Proust not only brought to the fore the beauty of centuries past but also set the scene for the era of modernism. This genius could not have so gloriously entered the twentieth century had he not proudly stood on the shoulders of giants.” —From the Conclusion

Reading was so important to Marcel Proust that it sometimes seems he was unable to create a character without a book in hand. Everybody in his work reads: servants and masters, children and parents, artists and physicians. The more sophisticated among them find it natural to speak in quotations. Proust made literary taste a means of defining personality and gave literature an actual role to play in his fiction.

In this wonderfully entertaining book, scholar and biographer Anka Muhlstein draws out these themes in Proust's work and life, thus providing not only a friendly introduction to the momentous In Search of Lost Time, but also allowing glimpses at some of the highlights and lost treasures of French literature.

Anka Muhlstein is the author of biographies of Queen Victoria, James de Rothschild, and Cavelier de La Salle; studies on Catherine de Médicis, Marie de Médicis, and Anne of Austria; a double biography, Elizabeth I and Mary Stuart; and most recently, Balzac’s Omelette and Monsieur Proust’s Library (Other Press). She won the Goncourt Prize for her biography of Astolphe de Custine, and has received two prizes from the Académie française. She and her husband, Louis Begley, are the authors of Venice for Lovers. They live in New York City.

“This gemlike exploration of the literary underpinnings of À la recherche du temps perdu reveals a Marcel Proust who did not so much read books as ‘absorb’ them.” —The New Yorker

“With Monsieur Proust’s Library, Anka Muhlstein has added another volume to the collection of splendid books about Proust. A woman of intellectual refinement, subtle understanding, and deep literary culture…Muhlstein is an excellent provisioner of high-quality intellectual goods.” —Wall Street Journal

“[Muhlstein] is thoroughly versed not only in Proust’s life but also in his work…This biography is an easy and interesting read, even for the novice Proust scholar, and an excellent accompaniment to an In Search of Lost Time (re)read.” —San Francisco Book Review

“The author of Balzac’s Omelette offers another sensual appreciation of a classic author, this time submitting to the books that Proust loved…You don’t absolutely need to know In Search of Lost Time to read Muhlstein’s brisk little volume, a mini-biography that dissects the many literary influences of [Proust].” —Daily Beast (Hot Reads)

“The general madeleine enthusiast is bound to be entertained by Muhlstein’s witty and lucid prose…This tome energetically explores the distinct literary tastes of a modern writing genius.” —Library Journal

“[Monsieur Proust’s Library] has become a permanent addition to my Proust library, and is a must read both for Proustians and want-to-be Proustians alike…a marvelous book.” —Publishing Perspectives

“Muhlstein shows admirable restraint, focusing on select topics to contextualize Proust’s work in an accessible way…It’s a quick read, and the tight focus and brisk, topical chapters offer an entrée to a work that is not always easy to penetrate.” —Coffin Factory

“Muhlstein has ideas of her own about the way in which Proust not only dealt with the anxieties of influence but also brought to a head a long and rich tradition—something one can scarcely imagine a writer doing today.” —Gay and Lesbian Review