Concerning the Spiritual in Art (Hardcover) 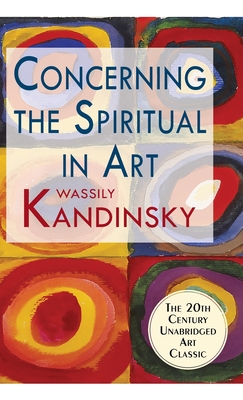 Concerning the Spiritual in Art (Hardcover)

Pioneering and Exploring the Spiritual Revolution in Modern Art

In the early 20th century, the pioneering and celebrated painter Wassily Kandinsky (1866-1944) wrote this groundbreaking work advocating a powerful role for spirituality in driving the creation of modern art. Voicing his own strong opinions as well as the philosophical passions of his peers, Kandinsky urged traditional artists to break free from the limiting restraints of the material world in their work. By faithfully using their own uninhibited thoughts and inner emotions for inspiration-essentially channeling the human spirit instead of representing material concerns-he believed that artists could transcend the norms of the time to reach new levels of abstract expression and aesthetic beauty. Likewise, he also challenged the viewing public to admire art with a fierce spiritual hunger.

With insightful explorations of form and color theory, creative inspiration, psychology, religion, music, ethics, and even politics, Kandinsky makes a strong case for his artistic revolution. The movement he inspired with his theories played a pivotal role in the development of modern art, particularly in the growth and evolution of abstract painting.

Featuring an enlightening introduction by the book's translator, Michael T. H. Sadler, providing generational and cultural context for Kandinsky and his work, Concerning the Spiritual in Art gives testimony to the mind and creative expression of Kandinsky and other artists of his generation. This seminal and thought-provoking book exploring the heart of the artistic endeavor belongs in the library of every serious artist and student of modern art.

This work is also available from Echo Point Books in a paperback edition; just look for ISBN 1635619068.