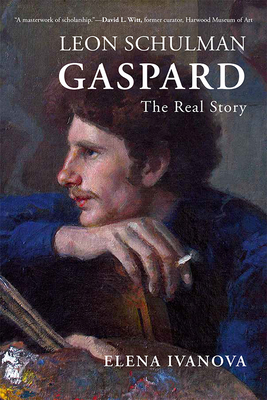 In Leon Schulman Gaspard: The Real Story, Elena Ivanova does a masterful job of revealing the truth behind the constructed biography that the artist promoted. Her thoughtful analysis of his art and life makes it possible to see Gaspard's work in a new light. --Sarah E. Boehme, PhD, curator, Stark Museum of Art

A masterwork of scholarship ... Leon Schulman Gaspard provides the definitive account of a man given to fantasy both in his paintings and in what he told others about himself. This is a wondrous journey into the art and life of a fascinating character, including an extraordinary account of the Russian art world. --David L. Witt, former curator, Harwood Museum of Art

Through his captivating paintings of Indigenous cultures and folk traditions, Leon Schulman Gaspard spent a lifetime teaching the world about itself and introducing us to places most of us would never see.

More than fifty years after his death, his vibrant, light-infused works--which critics compared to glittering mosaics--continue to mesmerize with their magic and mastery of execution. But his own life has been shrouded in mystery. Until now.

From his early days in Vitebsk in the Russian Empire to Paris to Taos, New Mexico--his home for more than forty years--Gaspard's story, and even his name, were a constant evolving creation of his own making.

He liked to cast himself in an exotic light: a son of a wealthy father of French extraction and a mother who was an accomplished pianist and a student of Anton Rubinstein; a close friend of famous artists, writers, and musicians who sought his advice; a secret agent for the French government in North Africa; an intrepid explorer who spent years traveling in remote, and often inhospitable, parts of the world.

However, these stories began to crumble as new facts were discovered.

In this deeply researched book, which includes more than sixty illustrations, veteran museum educator and art historian Elena Ivanova draws upon ten years of research at twenty archives and museums in four countries as well as stories little-known beyond the family circle to reveal the truth about one of history's most fascinating and elusive artists.