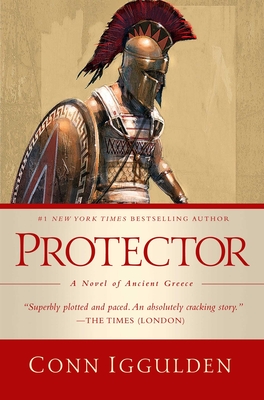 The latest epic in this bestselling author’s Athenian series of novels takes the reader on a vivid adventure where Themistocles will risk everything—his honor, his friendships, even his life—to protect his country.

The Battle of Salamis: Persian King Xerxes stands over the smoking ruins of Athens, an army of slaves at his back. Come to destroy, once and for all, everything that the city stands for, he stares pitilessly at the hopelessly outnumbered Greeks.

Veteran soldier Themistocles cannot push the Persians back by force on land, and so he so does so by stealth, at sea. Over three long days, the greatest naval battle of the ancient world will unfold, a bloody war between the democracy of Athens and the tyranny of Persia.

The Battle of Plataea: Less than a year later, the Persians return to reconquer the Greeks. Tens of thousands of soldiers on both sides ready themselves for war. For the Spartans, Plataea is a chance to avenge their defeat at Thermopylae.

For the people of Athens, threatened on all sides, nothing less than the survival of democracy is at stake. And once again Themistocles, the hero of Salamis, will risk everything—his honor, his friendships, even his life—to protect his country.
Conn Iggulden is one of the most successful authors of historical fiction writing today. Among many other bestselling novels, he is the author of The Abbot’s Tale, The Falcon of Sparta, The Gates of Athens, and Protector, all available from Pegasus Books. Conn lives in London.
“A compelling, informative read. Iggulden is a master of military fiction, capable of rivaling Bernard Cornwell’s skill in recreating battles on land and Patrick O’Brian’s vivid portrayals of conflicts at sea.”
— Historical Novels Review

"Devotees of the ancient world will relish this exciting historical novel."
— Booklist

"A well-researched tale of heroism and hardship, honor and betrayal in which anyone's life can disappear. Exciting fare, a yarn well-spun."
— Kirkus Reviews

"A rousing retelling of a singular event, as seen through the eyes of three leaders on a momentous trek, this latest historical novel by Iggulden will be of interest to both young and old readers of military and ancient history."
— Library Journal

"Having already taken on Julius Caesar, Genghis Khan, and the War of the Roses, Iggulden successfully dramatizes the life of Dunstan, Abbot of Glastonbury. Immerses the reader in tenth-century England."
— Publishers Weekly

"Superbly plotted and paced. An absolutely cracking story. The pace is nail-biting and the set dressing magnificent. Iggulden has created an intriguingly complex saint—flawed, spiteful, and unreliable as the teller of his own tale. Through his eyes we watch the story of the making of England."
— The Times (London)