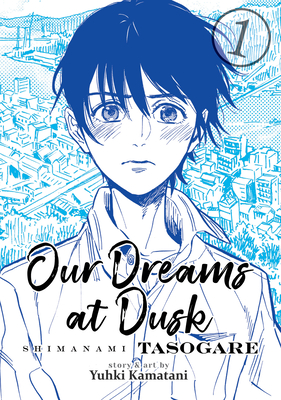 This is book number 1 in the Our Dreams at Dusk: Shimanami Tasogare series.

The Harvey-nominated manga about a broad LGBT+ community. Not only is high schooler Tasuku Kaname the new kid in town, he is also terrified that he has been outed as gay. Just as he’s contemplating doing the unthinkable, Tasuku meets a mysterious woman who leads him to a group of people dealing with problems not so different from his own. In this realistic, heartfelt depiction of LGBT+ characters from different backgrounds finding their place in the world, a search for inner peace proves to be the most universal experience of all.
Yuhki Kamatani is a Japanese manga writer and artist best known for Nabari no Ou and Shimanami Tasogare.

Nominated for Best Manga in the 2019 Harvey Awards.

“While manga frequently portrays the characters in yaoi/yuri (“boys’ love”/“girls’ love” genres) in a fetishized light, this series takes a refreshing turn, and the high-quality art makes it a potential breakout for broader audiences.” – Publishers Weekly (starred review)

"This is an incredibly thoughtful series, one which drives home the idea that gender identity and sexuality — and how they are expressed — are different for everyone. Creator Yuhki Kamatani’s artwork toes the line between reality and surrealism, conveying the conflicting feelings about self-realization and self-actualization through an incredible use of themed imagery." --The Beat, Best Comics of 2019

"...Our Dreams at Dusk understands deeply the subtle, precise and terrible ways queerphobia is ingrained into society, and how even these asides that seem so small and benign to those saying them can drive us even deeper into the closet. But in spite of this terror, in spite of this awful, quiet hostility, Our Dreams at Dusk understands the beauty and power of showing the world who you truly are." – Faye Hopper, Anime News Network

"Our Dreams at Dusk: Shimanami Tasogare is a masterpiece of LGBTQ life in Japan and a masterwork of a manga." – Erica Friedman, Okazu