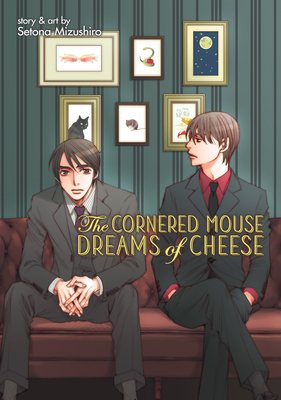 This is book number 1 in the The Cornered Mouse Dreams of Cheese series.

A compelling LGBT+ drama by the Eisner-nominated creator of Black Rose Alice and After School Nightmare! When Otomo Kyoichi’s wife starts to suspect that her husband is cheating on her, she hires a private eye, Imagase, to investigate him. However, not only does Imagase know Kyoichi from college, but he’s been nursing a crush on the man for years. Imagase gives Kyoichi an ultimatum: if Kyoichi wants to keep his cheating ways under wraps, then he has to give Imagase something in return. Imagase’s demands start with a kiss, but as the two men become entangled in each other’s lives, it soon becomes clear they each might want more than the other can give.
Setona Mizushiro, nominated for an Eisner Award in 2007, is a prolific Japanese creator behind many works already translated into English: X-Day, After School Nightmare, and Black Rose Alice. Her josei series The Cornered Mouse Dreams of Cheese is her first Boys' Love/BL work to be published in English.