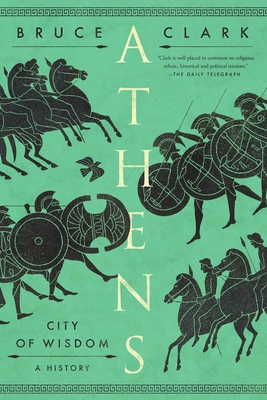 
On Our Shelves Now
(This book is nonreturnable. Nonreturnable books may take up to 3 weeks to ship. All sales final.)
A sweeping narrative history of Athens, telling the three-thousand-year story of the birthplace of Western civilization.

Even on the most smog-bound of days, the rocky outcrop on which the Acropolis stands is visible above the sprawling roof-scape of the Greek capital. Athens presents one of the most recognizable and symbolically potent panoramas of any of the world's cities: the pillars and pediments of the Parthenon – the temple dedicated to Athena, goddess of wisdom, that crowns the Acropolis – dominate a city whose name is synonymous for many with civilization itself.

It is hard not to feel the hand of history in such a place. The birthplace of democracy, Western philosophy and theatre, Athens' importance cannot be understated. Few cities have enjoyed a history so rich in artistic creativity and the making of ideas; or one so curiously patterned by alternating cycles of turbulence and quietness.

From the legal reforms of the lawmaker Solon in the sixth century BCE to the travails of early twenty-first century Athens, as it struggles with the legacy of the economic crises of the 2000s, Clark brings the city's history to life, evoking its cultural richness and political resonance in this epic, kaleidoscopic history.
Bruce Clark writes on European Affairs and Religion for The Economist. He has been diplomatic correspondent of the Financial Times, Moscow correspondent for The Times, and Athens correspondent for Reuters. This is his first book to be published in America. Bruce lives in Britain.
“From Pheidias’s Parthenon to Calatrava’s OlympicStadium,BruceClarkhaspulled off a stunning retrospect and beautifully written overview of one of the world’s greatest cities. Athenophiles of all ages and stripes will find in Athens a cornucopia of city-related treasures.”
— Paul Cartledge, author of Thebes and Thermopylae

“A magnificent tour de force, drawing on the testimony of eye-witnesses across a span of 2,500 years. Bruce Clark brings an eye for the quirky, human detail, a pithy turn of phrase, and an affection for his subject honed over many decades.”
— Roderick Beaton, author of Greece: Biography of a Modern Nation and The Greeks: A Global History

“A remarkable achievement. Courageously grand in scale yet sensitive to the details that make Athens’s extraordinary history come alive, right up to the present day.”
— Sofka Zinovieff, author of Putney: A Novel

“Athens was, and still is, a city that drives its own narrative. This book is nothing short of a triumph, and Clark’s delight in Athens paired with researched historical accuracy make his work shine.”
— Booklist (starred)

"In a sweeping history covering thousands of years, Bruce Clark combines academic rigour with a personal passion for Greece. Given such a sweep of history, it’s a story that brings with it a multitude of moments — highs and lows; glorious triumphs and bitter defeats — which the author presents in 21 detail-packed chapters, each focusing on a critical moment in the history of Athens. Clark’s affection for a city that he still sees as a symbol of democracy is unmissable and highly informative. This native Athenian reviewer certainly came away with many fresh insights into her home town."
— Eleni Varvitsioti