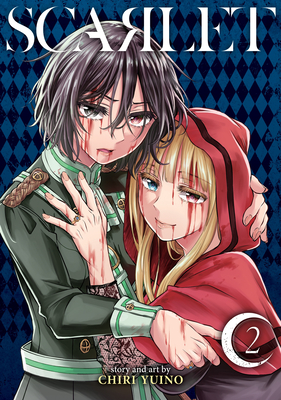 This is book number 2 in the Scarlet series.

A LOVE THAT WILL DEVOUR THEM WHOLE Finé is under a terrible curse that causes her to transform into a bloodthirsty monster. Her werewolf lover Iris is determined to help Finé become human again...if only because Iris wishes to eat her. But when their enemies start moving against them, Finé loses control of the monster within. Can Iris bring her back from the brink? The thrilling conclusion to a supernatural yuri romance! The final volume!
Yuino Chiri is an up-and-coming Japanese manga creator best known for a story in the Citrus anthology and the manga series Scarlet.
“The dark, scratchy, blood-spattered cheesecake art [of Scarlet] is far from typical yuri (lesbian) manga, but the scattershot plot delivers on creating a world populated almost entirely by attractive women and then finding reasons for them to fight each other, fight side by side, suck each other’s blood, rip clothing off, and get into other violent but sexy shenanigans.” --Shaenon K. Garrity, Otaku USA