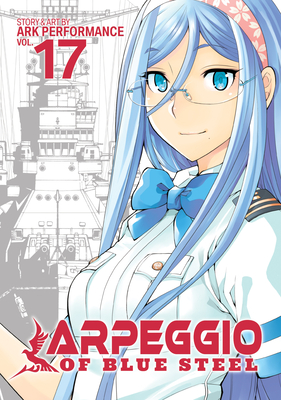 This is book number 17 in the Arpeggio of Blue Steel series.

TRIALS AND TRIBULATIONS Amidst the preparations for the National Maritime Institute of Technology’s school festival, Takao and 402 make their way into the heavily guarded “Facility Number Four.” Deep below the burned-out ruins of the facility lies a strange secret. Elsewhere, in order to protect the White Whale from an encroaching Fog patrol fleet, the crew of the I-401 creates a diversion, only to find themselves ambushed!
Ark Performance is a Japanese author/artist duo whose best known credits include Samurai Commando, Arpeggio of Blue Steel, and a Mobile Gundam Suit spin-off. In 2011, the two contributed to the Trigun: Multiple Bullets anthology.