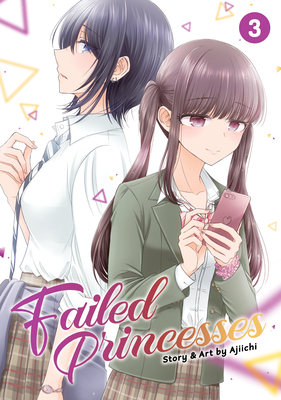 This is book number 3 in the Failed Princesses series.

TANGLED EMOTIONS The angst stirred up between Fujishiro and Kurokawa by the arrival of transfer student Akazawa Iroha has settled, yet Fujishiro’s feelings are still in turmoil. Will Aoda Izumi’s advice offer her some clarity of mind? To make matters even more complicated, there’s a class trip coming up—and the four girls are in the same group! Relationships might be confusing, but one thing is for sure: the trip is sure to make hearts race!
Ajiichi is a manga creator best known for Failed Princesses and other yuri manga.

“Certainly Nanaki’s use of the phrase “repay you with my body” (meaning her make up and shopping skills) is loaded, with Kanade giving it a sexual connotation in her mind, but right now that’s less important than the validation the girls bring to each other: that they are worthwhile people no matter what anyone else says. That’s a story worth following, no matter what your memories of high school are.” --Rebecca Silverman, Anime News Network

“[Failed Princesses] is highly reminiscent of Milk Morinaga’s schoolgirl Yuri works with enough original flavor to feel refreshing. If you enjoy titles like Girl Friends and Secret of the Princess, I highly recommend this manga.” --The Holy Mother of Yuri

“Fans of school drama Yuri and Morinaga Milk will be rewarded by these characters who exceed their stereotypical origins.” --Erica Friedman, Okazu