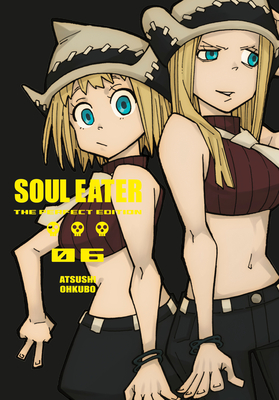 
On Our Shelves Now. Click on title for location specific availability.
Experience the quirky, action-packed adventures of Maka and Soul Eater like never before, with this all-new, deluxe collector's edition to celebrate Atsushi Ohkubo's global hit!!

Medusa's back on the scene just in time for the mad dash to possess Eibon's Demon Tools! But her reappearance throws poor Crona, who's just settling in to life at DWMA, for a loop. Will the new allies turn into old enemies?!

Meisters and their Weapons takes on a whole new look in the gorgeous Soul Eater: Perfect Edition!

Dive into Maka and Soul's adventures in a unique larger format on high-end paper stock that maximizes the dynamic art of the series!

Each volume of this deluxe omnibus edition of the megahit manga includes:

Soul Eater, his longest-running work to date, ran in the same magazine from 2004–2013 and went on to become an international bestseller with nearly 20 million copies sold worldwide. Soul Eater also received an anime adaptation that was broadcast on Cartoon Network.

Ohkubo is currently working on the series Fire Force.