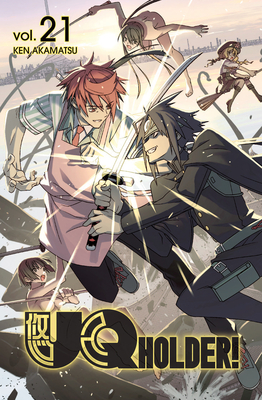 This is book number 21 in the UQ HOLDER! series.

While Nikitis occupies Tōta, the Senkyōkan comes under attack. Jinbei and Juzō put their relationship to the test as they face off in a fight to the death. Can Jinbei defeat Juzō's 800 years of sword mastery to awaken his friend from Ba'al's control? Clashing with the boy he once saved, Jinbei reveals the true nature of his Switcheroo. And, at a climactic moment, Tōta arrives just as Dana--his old master--appears out of nowhere. She may no longer be the teacher he once knew... The UQ members must unite to face their greatest battle yet!
KEN AKAMATSU is the best-selling creator of Negima!, one of the most popular manga series in America. It was selected by Kodansha for their prestigious "Manga of the Year" award. Negima! has been converted into an anime series that is popular in both the United States and Japan. Akamatsu lives in Tokyo.