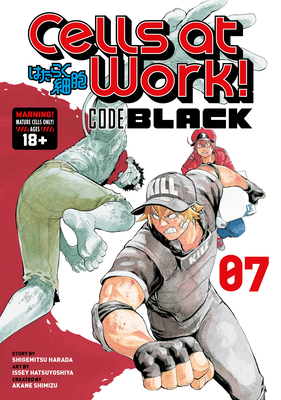 This is book number 7 in the Cells at Work! Code Black series.

In this new spinoff of the hit manga, a newbie Red Blood Cell is one of 37 trillion working to keep this body running. But something's wrong! Stress hormones keep yelling at him to go faster. The blood vessels are crusted over with cholesterol. Ulcers, fatty liver, trouble (ahem) downstairs... It's hard for a cell to keep working when every day is a CODE BLACK!


BEFORE FIRST LIGHT
After years of struggle against the ill health of this body and the despair in its heart, the first glimmers of hope have begun to appear. Could the body finally be taking control of its health and looking to the future? Alas, even amid this turnaround, the costs of the life the body has led are still coming due. In a hidden corner, a copying error occurs, then repeats itself, then repeats itself again. A new, unnoticed threat is getting out of control: Cancer.
Akane Shimizu is the creator of Cells at Work!