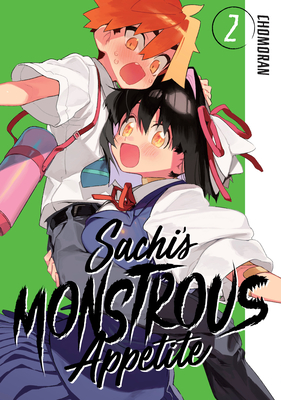 
On Our Shelves Now. Click on title for location specific availability.
Fans of monster romance manga, look out! Sachi's Monstrous Appetite will slake your thirst!

Makie’s mostly just a regular middle schooler: He likes cooking, he’s got a crush on a girl, and his scent is irresistible to man-eating monsters called watari. The girl he likes, Sachi, has put great effort into appearing to be a normal girl. She’s got a crush on Makie, too…but she’s also a shapeshifting watari living as a human, and she knows that if she wants to keep Makie alive and all to herself, she’ll need to fight off her fellow monsters! Young love blooming is always complicated, but how will Makie deal with his first relationship when supernatural creatures keep trying to eat him in the middle of a date? Rude!
An RPG fan and aspiring illustrator as a child, Chomoran became a professional manga artist after years of creating fan zines. His debut was a four-volume manga spinoff of the Zaregoto series by NISIOISIN (Bakemonogatari). Sachi's Monstrous Appetite is his first manga to be published in English.