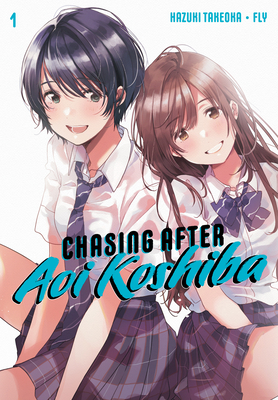 This is book number 1 in the Chasing After Aoi Koshiba series.

A yuri romance about the intense feelings of youth, and the perspective and regrets that adulthood can bring, for fans of manga like Bloom Into You and Orange. From the creator of Masamune-kun's Revenge Hazuki Takeoka and acclaimed yuri artist Fly.

Sahoko had lots of friends in high school, so there’s no shortage of people to catch up with at her reunion. But the person she wants to see most is missing: Aoi Koshiba, her old classmate and first crush. Years ago, Aoi was the basketball team’s rising star, and caught Sahoko’s eye as an easy way to score social points. Sahoko later learned, however, that Aoi had long quit the game due to a difficult home situation. When an unexpected kiss pulled the girls closer together one day, it became clear that Aoi was in need of more than just a cynical social climber—and perhaps, Sahoko was the one.
Creator of the popular manga and anime Masamune-kun's Revenge, Takeoka is also the writer behind the new yuri manga series Chasing After Aoi Koshiba.

The prolific Fly is an illustrator who has drawn covers for the magazines Comic REX and Monthly Yurihime, published a variety of artbooks, and contributed manga based on properties such as Persona 3, Kemono Friends, and Tales of Berseria. Fly's English-language debut is the yuri romance manga Chasing After Aoi Koshiba.