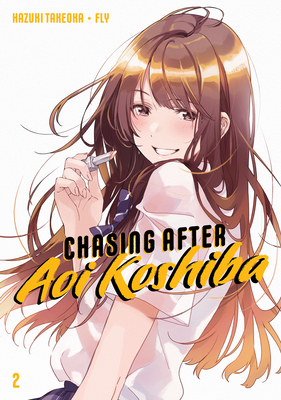 This is book number 2 in the Chasing After Aoi Koshiba series.

A yuri romance about the intense feelings of youth, and the perspective and regrets that adulthood can bring, for fans of manga like Bloom Into You and Orange. From the creator of Masamune-kun's Revenge Hazuki Takeoka and acclaimed yuri artist Fly.

Sahoko Narita is enjoying the perks of finally being one of the popular girls in high school. One summer day, however, she encounters the athletic and tomboyish Aoi Koshiba and her world is thrown into disarray. Their growing friendship is tested when Aoi Koshiba confides in Sahoko about an upcoming date with a fellow classmate, Shoji Miwa. Sahoko, unable to hide her surprise, must come to grips with her own feelings for Aoi before it's too late...
Creator of the popular manga and anime Masamune-kun's Revenge, Takeoka is also the writer behind the new yuri manga series Chasing After Aoi Koshiba.

The prolific Fly is an illustrator who has drawn covers for the magazines Comic REX and Monthly Yurihime, published a variety of artbooks, and contributed manga based on properties such as Persona 3, Kemono Friends, and Tales of Berseria. Fly's English-language debut is the yuri romance manga Chasing After Aoi Koshiba.