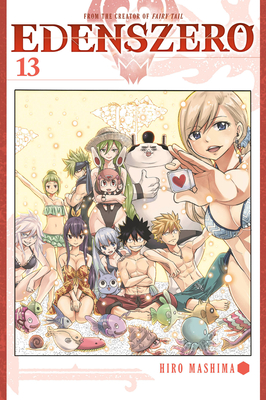 This is book number 13 in the Edens Zero series.

HOTTER UNDER THE WATER

After their disastrous encounter with the bizarro Demon King Ziggy, Shiki and his friends set out on a journey into outer space, beyond the Sakura Cosmos. Their ﬁrst stop is in the Aoi Cosmos, on a planet largely covered in water. Under the vast ocean, they ﬁnd a temple housing a critical clue to ﬁnding the matriarch of the cosmos, Mother! But in order to obtain the clue, Shiki must overcome a ﬁery obstacle that requires enlisting the tearful aid of an unexpected ally.
One of the world's bestselling and most prolific comics artists, Hiro Mashima is the creator of the 63-volume magical epic Fairy Tail as well as its prequel Fairy Tail Zero, fantasy series Rave Master, the game spinoff Monster Hunter Orage, and a variety of other manga series and short stories.