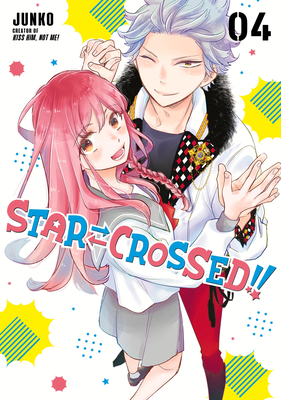 This is book number 4 in the Star-Crossed!! series.

From the creator of the hit manga and anime Kiss Him, Not Me! comes another off-the-wall, geeky shojo comedy! A series of mixups leads to God misplacing the souls of a girl and the handsome idol singer she adores--in each other's bodies! And they can switch back and forth by...kissing?!


With Azusa’s support, Chika rediscovers his passion for acting and vows to conquer his fear of auditions. However, just as the two begin to grow truly close to each other, Chika’s ex-girlfriend appears on the scene! The development not only awakens a rush of emotions in Azusa, but also reveals the shocking reason she and Chika switch bodies. Faced with such dire circumstances, can this fangirl and her idol overcome fate itself?


FINAL VOLUME!
Junko is the creator of the worldwide manga and anime hit Kiss Him, Not Me! Her latest work is Star-Crossed.