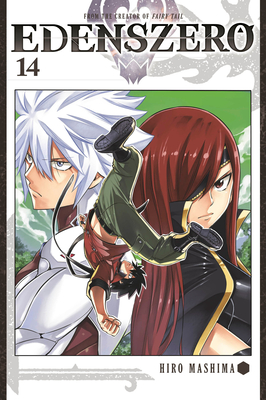 This is book number 14 in the Edens Zero series.

A JUMBLED RUMBLE IN THE JUNGLE

A visit from Ziggy has somehow managed to make the robots on Foresta go haywire and rise up against all humans. Shiki and his friends want to ﬁnd a way to return the robots to normal, but several members of the Poseidon Nero Commando Team have arrived to “solve” the robot problem with mass destruction. Further complicating matters, Justice and his crew from the Interstellar Union Army have also made their way to Foresta in hopes of capturing Elsie. With a forest full of all kinds of trouble, can Shiki and his friends ﬁnd a way restore the robots’ sanity and save them from annihilation?
One of the world's bestselling and most prolific comics artists, Hiro Mashima is the creator of the 63-volume magical epic Fairy Tail as well as its prequel Fairy Tail Zero, fantasy series Rave Master, the game spinoff Monster Hunter Orage, and a variety of other manga series and short stories.