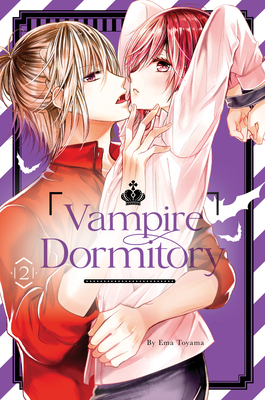 This is book number 2 in the Vampire Dormitory series.

SHE'S NOT THAT GIRL

After a life of loneliness, the crossdressing Mito has finally found a place where she belongs—living in a boys' dorm as a vampire's thrall! Ruka doesn't know she's a girl, yet he showers her with love in order to sweeten her blood. But just as Mito thinks she's found happiness, she finds out that every vampire has a "fated partner"...and that Ruka is only using her as a temporary substitute. Meanwhile, Mito ends up in close quarters with the mysterious Ren, who has vowed to protect her from being turned into a vampire. Why does he care so much? Could he be falling for her...?
Ema Toyama is a Japanese manga artist. She made her debut in September 2003 in the monthly manga magazine Nakayoshi with Pixie Pop, also her English-language debut. She has since written I Am Here!, Missions of Love, Vampire Dormitory, and Aoba-kun's Confessions, all published by Kodansha Comics. She also contributed to the shojo horror short story collection Neo Parasyte f.