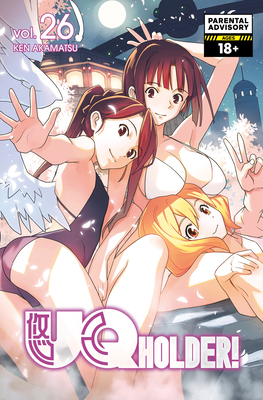 This is book number 26 in the UQ HOLDER! series.

REUNITED AND IT FEELS...
After reuniting with his friends, the large gap in Tōta’s memories is ﬁlled when he’s told what really happened after Ba’al’s forces attacked the orbital ring. And with a blessed respite from being hunted by Ba’al’s elite demon hit squad, Tōta is able to take some time to reconnect with his beloved friends and comrades. Some allies that were thought lost are found and the wounds created by Tōta being absent for over 40 years are healed with immortal love.

KEN AKAMATSU is the best-selling creator of Negima!, one of the most popular manga series in America. It was selected by Kodansha for their prestigious "Manga of the Year" award. Negima! has been converted into an anime series that is popular in both the United States and Japan. Akamatsu lives in Tokyo.