A Galaxy Next Door 2 (Paperback) 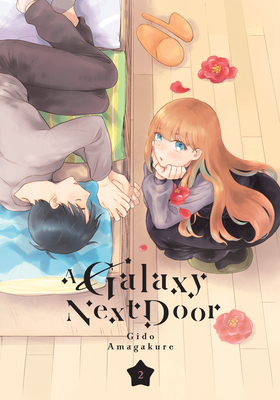 A Galaxy Next Door 2 (Paperback)

This is book number 2 in the A Galaxy Next Door series.

The new sweet and wild romantic comedy from the creator of the hit manga and anime about food and family, Sweetness & Lightning! A desperate manga artist, called on to support his two young siblings, meets a new art assistant. But her arrival isn't just a small step, it's a giant leap…

How hard can dating be?

After a single, accidental touch finds Ichiro, a struggling manga shojo artist, suddenly engaged to his new assistant, the beautiful, alien(?) princess, Shiori, they agreed to test the waters of their new relationship with their very first date! Will an outing at the zoo, a dinner, and a picnic deepen their relationship and their confidence? There's only one problem...it's never just the two of them! With winter fast approaching and Christmas soon upon them, can Ichiro and Shiori work up the courage to embark on that famous shojo manga love story staple--the Christmas date?!
Gido Amagakure's past works include Maboroshi ni Furete Yo and Liqueur. Amagakure is best known for Sweetness and Lightning, which was adapted into a hit anime series. Sci-fi romantic comedy A Galaxy Next Door is his newest work.