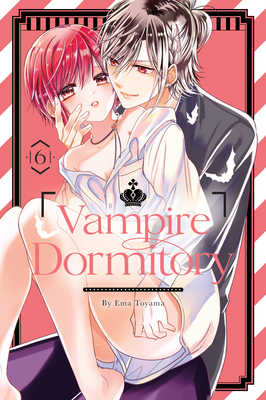 This is book number 6 in the Vampire Dormitory series.

Mito, who has no family to rely on, lives on the streets, disguised as a boy. Ruka, an otaku vampire who's only interested in 2-D girls, saves her from a perilous situation and makes her an offer: become his subservient thrall from which he can feed whenever he wants, and she can live with him--in the boys' dorm. Because her very existence depends on her secret not being found out, every day is a new danger--to say nothing of that vampire! Meanwhile, Ruka, not knowing Mito's a girl, dotes on her night and day in an attempt to ripen her "disgusting male blood," but when real feelings develop...this dangerous romance between a crossdressing girl and an obsessive vampire begins!
Ema Toyama is a Japanese manga artist. She made her debut in September 2003 in the monthly manga magazine Nakayoshi with Pixie Pop, also her English-language debut. She has since written I Am Here!, Missions of Love, Vampire Dormitory, and Aoba-kun's Confessions, all published by Kodansha Comics. She also contributed to the shojo horror short story collection Neo Parasyte f.