Batman: The Definitive History of the Dark Knight in Comics, Film, and Beyond [Updated Edition] (Hardcover) 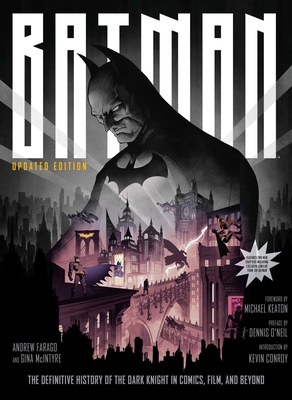 Batman: The Definitive History of the Dark Knight in Comics, Film, and Beyond [Updated Edition] (Hardcover)


On Our Shelves Now
Explore over eighty years of Batman history in this updated official edition featuring a wealth of new content, including a new chapter on acclaimed feature film The Batman.

Featuring two new chapters and content from the new feature film The Batman, this updated volume tells the complete story of Batman and his many guises throughout the years. Since his 1939 debut in the pages of Detective Comics, Batman has become an icon, instantly recognizable the world over. Yet, despite being known to millions, Gotham City’s Guardian has been interpreted in so many radically different ways that we all now have our own Batman. To some he’s the colorful Caped Crusader who dispatches villains with a POW! To others he’s the grim Dark Knight hell-bent on avenging the death of his parents. And to others still he’s made of LEGO, has great abs, and likes to eat lobster thermidor!

This deluxe edition explores the Batman across comics, TV, animation, film, video games, and beyond, to present a compelling portrait of one of the most recognizable and versatile characters in the history of fiction. Covering the complete history of Batman in vivid detail, this deluxe edition features exclusive commentary from the key creatives who have been instrumental in building the Dark Knight’s ongoing legacy, including Neal Adams, Tim Burton, Paul Dini, Steve Englehart, Mark Hamill, Grant Morrison, Julie Newmar, Christopher Nolan, Denny O’Neil, Joel Schumacher, Scott Snyder, and Zack Snyder.

Along with taking readers on an unparalleled journey into the creation of the most memorable Batman moments in the character’s eighty-year history—from the “Knightfall” comics arc to Tim Burton’s films and the Arkham video game series—the book busts open the DC Comics and Warner Bros. archives to deliver an avalanche of never-before-seen visual treasures that are guaranteed to blow the minds of Batman fans everywhere.

Filled with exclusive insert items that further deepen the reading experience, this updated edition of Batman: The Definitive History of the Dark Knight in Comics, Film, and Beyond is the ultimate exploration of a true legend whose impact on our culture has no limits.

COMPREHENSIVE HISTORY: Over 400 pages detailing every incarnation of The Caped Crusader across comics, TV, animation, movies, videogames and beyond.

EXCLUSIVE BONUS INSERTS: Filled with pull-out cards, posters, mini-books, and other interactive ephemera that bring the history of the caped crusader to life.

NEVER BEFORE SEEN IMAGES: Taken directly from the archives of DC and Warner Bros., enjoy exclusive, unseen treasures from the 80-year history of Batman.

COMPLETE YOUR COLLECTION: Batman: The Animated Series, DC Comics: Anatomy of a Metahuman and DC Comics Variant Covers: The Complete Visual History also available.
Andrew Farago is the curator of San Francisco’s Cartoon Art Museum and the author of Batman: The Definitive History of the Dark Knight in Comics, Film, and Beyond, DC: Collecting the Multiverse: The Art of Sideshow, and the Harvey Award–winning Teenage Mutant Ninja Turtles: The Ultimate Visual History. In 2015, he received the prestigious Inkpot Award from Comic-Con International.

Gina McIntyre is the New York Times best-selling author of Stranger Things: Worlds Turned Upside Down. Other award-winning books include Guillermo del Toro's The Shape of Water: Creating a Fairy Tale for Troubled Times, Star Wars Icons: Han Solo, Game of Thrones: The Costumes and more. A longtime entertainment journalist, her work has appeared in the Los Angeles Times, Entertainment Weekly and The Hollywood Reporter.