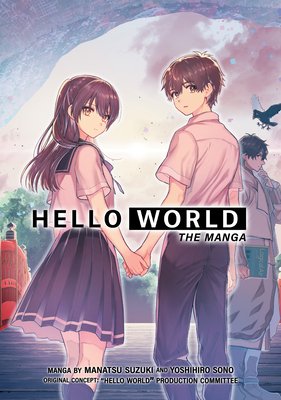 
On Our Shelves Now. Click on title for location specific availability.
An atmospheric high school love story with a science fiction plot full of twists and turns. (And don’t miss the light novel, also from Seven Seas!)

Naomi is a shy teenage boy living an ordinary life until the day a mysterious man appears–himself, ten years in the future. Future Naomi brings a dire warning: Naomi’s soon-to-be girlfriend Ruri will be in a tragic accident not long after they start dating. Can they change the past and build a better future…or is there something more to Naomi’s mission than saving one girl’s life?

Mado Nozaki won the first "Media Works Bunko Award" for his 2009 movie (Ei) Amrita. Since then, he has worked on scripts for the manga and anime KADO - The Right Answer and the novel Babylon, which was adapted into a manga and anime.

Yoshiro Sono is a Japanese artist and manga creator best known for various Gundam manga and the manga version of HELLO WORLD.

Manatsu Suzuki is a Japanese artist and manga creator best known for titles such as Connect, Abe-kun no Nanakakan Sensen, and the manga version of HELLO WORLD.