In Their Own Words, Volume 1, The New England Colonies: Today's God-less America... What Would Our Founding Fathers Think? (Paperback) 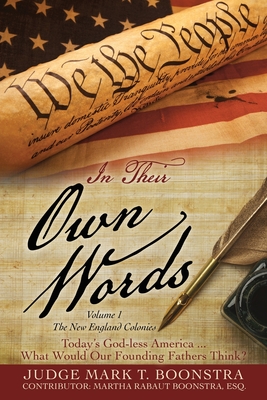 In Their Own Words, Volume 1, The New England Colonies: Today's God-less America... What Would Our Founding Fathers Think? (Paperback)


On Our Shelves Now. Click on title for location specific availability.
What has happened to America? It's no longer the country of our founding. Why? In a word . . . we've lost God. Our Founding Fathers established one nation under God. They declared that our rights came from God. They appealed to the Creator, the Almighty, the Supreme Being, for his guidance and protection. They understood that religion is essential to a free society (and to its government), not something to be separated from it. But the secularists have transformed America. They have banished God. And so they have gutted America of the very core, the foundation, the essence, of what made it America. You know it's true. You see it all around you. But how do you know? In In Their Own Words, Judge Boonstra shows you what your gut instinctively is telling you. He reveals not only who our Founding Fathers were, and what they believed, but he brings it to light In Their Own Words. And he then contrasts what our Founding Fathers said with real-world examples of what is happening today in America. So, don't take his word for it. Take the words of our Founding Fathers themselves. And then ask yourself: What Would Our Founding Fathers Think (of today's God-less America)? America, it's time to decide. Included in Volume I: John Adams Samuel Adams John Hancock Alexander Hamilton and so many more . . . Hon. Mark T. Boonstra is a highly respected jurist who has served since 2012 as a Judge of the Michigan Court of Appeals. From 2015-2017, he concurrently served as a Judge of the Michigan Court of Claims, where the trial court matters over which he presided included cases arising out of the Flint Water Crisis. He is blessed to have at his side Martha Mary (Rabaut) Boonstra, who is both a nurse and the general counsel of a large health system, and whose grandfather, Congressman Louis C. Rabaut, authored the "Under God" amendment to the Pledge of Allegiance.