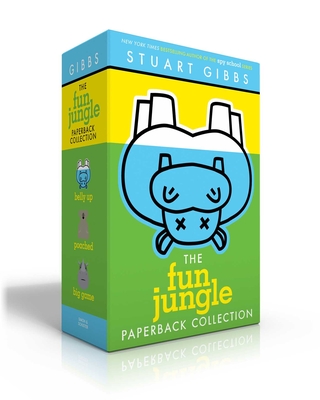 When Teddy Fitzroy moved into FunJungle, the nation’s largest zoo, with his scientist parents, he expected things to be kind of quiet. There’d be the occasional elephant stampede and water balloon fight with the chimpanzees, of course, but when Henry the Hippo dies from not-so-natural causes, Teddy suspects foul play. And that’s just the beginning. He begins to realize that the zoo is far more exciting than he thought it was, and soon the mysteries at FunJungle are piling up...

This adventurous boxed set includes:
Belly Up
Poached
Big Game
Stuart Gibbs is the New York Times bestselling author of the Charlie Thorne series, FunJungle series, Moon Base Alpha series, and Spy School series. He has written screenplays, worked on a whole bunch of animated films, developed TV shows, been a newspaper columnist, and researched capybaras (the world’s largest rodents). Stuart lives with his family in Los Angeles. You can learn more about what he’s up to at StuartGibbs.com.