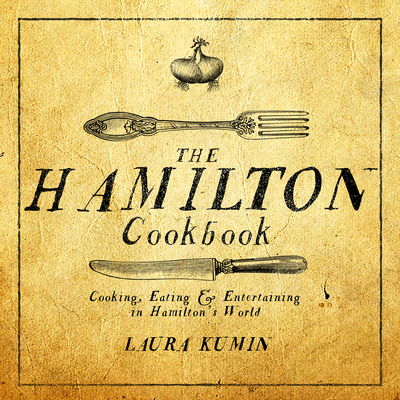 
Not on our shelves. Usually ships in 2-5 days.
Featured in Entertainment Weekly's Best Gift Guide and on Parade.com!

The Hamilton Cookbook takes you into Hamilton’s home and to his table, with historical information, recipes, and tips on how you can prepare food and serve the food that our founding fathers enjoyed in their day.

What was it like to eat with Alexander Hamilton, the Revolutionary War hero, husband, lover, and family man? In The Hamilton Cookbook, you’ll discover what he ate, what his favorite foods were, and how his food was served to him. With recipes and tips on ingredients, you’ll be able to recreate a meal Hamilton might have eaten after a Revolutionary War battle or as he composed the Federalist Papers.

From his humble beginnings in the West Indies to his elegant life in New York City after the American Revolution, Alexander Hamilton’s life fascinated his contemporaries. In many books and now in the hit Broadway musical Hamilton, many have chronicled his exploits, triumphs, and foibles.

Now, in The Hamilton Cookbook, you can experience first-hand what it would be like to eat with Alexander Hamilton, his family and his contemporaries, featuring such dishes as cauliflower florets two ways, fried sausages and apples, gingerbread cake, and, of course, apple pie.
Laura Kumin is the creator of MotherWouldKnow, a popular food blog, and is a Huffington Post blogger. She also teaches cooking and food history. Laura had a 20-plus year career as a lawyer before turning to food-related subjects. After keeping her research skills firmly based in legal minutiae for decades, she now gets to dig around in more fascinating territory. Her own recipe development and blog posts show a definite preference for desserts, especially chocolate ones, and fun snacks and side dishes.