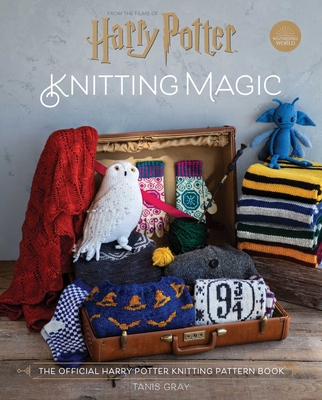 
On Our Shelves Now. Click on title for location specific availability.
Introducing the first official Harry Potter knitting book—a deluxe guide to creating over 25 authentic Harry Potter knits based on the iconic films.

Channel the magic of the Harry Potter films from the screen to your needles with the ultimate knitter’s guide to the Wizarding World. Featuring over 25 magical knits pictured in gorgeous full-color photography, this book includes patterns for clothing, home projects, and keepsakes pulled straight from the movies—and even includes a few iconic costume pieces as seen on-screen. With yarn suggestions based on the true colors used in the films, projects range from simple patterns like the Hogwarts house scarves to more complex projects like Mrs. Weasley’s Christmas sweaters. A true fan must-have, this book also includes fun facts, original costume sketches, film stills, and other behind-the-scenes treasures. Harry Potter: Knitting Magic is sure to have fans everywhere summoning needles, conjuring yarn, and practicing their best knitting wizardry.
Tanis Gray is the author of 11 knitting  books including the international bestseller Harry Potter: Knitting Magic and Star Wars: Knitting the Galaxy. She has over 500 published knitting patterns, has worked for Vogue Knitting, Martha Stewart, and HBO, was a regularly featured guest on Knitting Daily TV, has multiple stranded colorwork classes on Bluprint, and teaches knitting worldwide.
"A how-to manual designed to delight all fans of J.K. Rowling's fantastical series."

"If you're looking to adorn your home (and life!) with unique pieces that aren't sold in stores, you might want to take a gander at the The Official Harry Potter Knitting Pattern Book."
— House Beautiful

“As the first official pattern collection of its kind, we can’t say we blame fans for being excited.”

Doubles over as a solid collector’s item for those fans who can’t stop adding new things to their mountain of stuff. There’s no judgement here, especially since this knitting guide looks pretty awesome.
— Nerdist

"Fans who knit have even more options for expressing their love of all things magical."

“With a little creativity, you can bring some of the warm and fuzzy feelings of Hogwarts into your home.”

"This book is so well done, and the wide variety of knitting projects means there’s something in here for every Harry Potter fan."
— GeekMom

"Calling all wizards! Do you want to make magic with nothing other than your knitting needles? Then look no further... this guide will help you create Hogwarts magic in your own home, with something for every level of knitter."

"Grab your enchanted knitting needles... and get ready to create a magical world."
— Red Tricycle