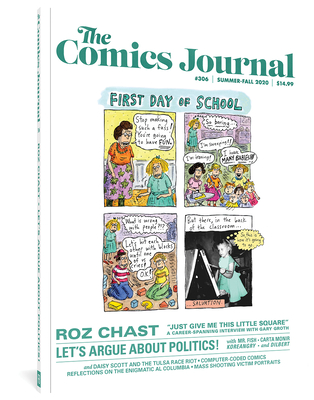 This issue of the award-winning magazine features a career-spanning interview with New Yorker cartoonist Roz Chast; asks, "Do we need political cartooning?"; and more.

In this issue, Gary Groth interviews Roz Chast, the New Yorker humor cartoonist turned graphic memoirist (Can’t We Talk About Something More Pleasant?). TCJ #306 focuses on the intersections between comics and politics. It includes op-eds on the importance (and lack thereof) of modern political cartooning. Also featured is a meditation on the creator of the Dilbert newspaper comic strip, Scott Adams; a piece about Daisy Scott, the first African American woman political cartoonist; a gallery of underground cartoonist John Pound’s code-generated comics; portraits of mass shooting victims; a selection of Spider-Gwen artist Chris Vision’s sketchbook pages; and other essays and galleries. Full-color illustrations throughout.

Roz Chast has been a regular contributor to The New Yorker since 1978. Her cartoons have been collected in What I Hate, Theories of Everything, and The Party After You Left. She also illustrated The Alphabet from A to Y, with Bonus Letter Z, the best-selling children’s book by Steve Martin. Her most recent book is Can’t We Talk About Something More Pleasant?, a memoir about her parents.

Gary Groth is the co-founder of The Comics Journal and Fantagraphics Books. He lives in Seattle.

Kristy Valenti is an Eisner-Award winning editor and a writer. She lives in Seattle, Wash.

RJ Casey is a publisher, editor, and writer. He lives in Tacoma, WA.
The Comics Journal [is the] storied arbiter of the indie-comics world.