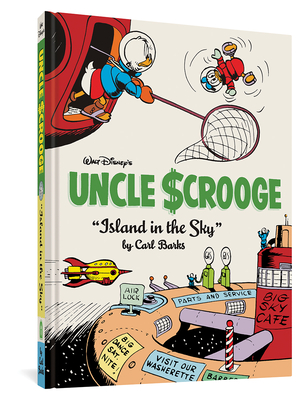 In this collection of internationally acclaimed Duck comics, Uncle Scrooge has adventures in outer space and on the high seas!

When Uncle Scrooge decides to seek out a safe new place to store his money, he sets his sights on an asteroid. But the asteroid he chooses holds a secret that he wasn't counting on! Then, the Beagle Boys construct an unstoppable mechanical behemoth to crack open Scrooge's Money Bin and steal all his cash in "The Paul Bunyan Machine." And, in "All at Sea," Scrooge, Donald, and the nephews set sail on a windjammer to collect $10 million in gold - but there be pirates on the high seas! Plus: the oddball inventions of the ever-eccentric Gyro Gearloose! Each page of these collections is meticulously restored and newly colored, with insightful story notes by an international panel of Barks experts.

Carl Barks (1901-2000, b. Merrill, Oregon; d. Grants Pass, Oregon), one of the most brilliant cartoonists of the 20th century, entertained millions around the world with his timeless tales of Donald Duck and Barks’s most famous character creation, Uncle Scrooge. Over the course of his career, he wrote and drew more than 500 comics stories totaling more than 6,000 pages, most anonymously. He achieved international acclaim only after he semi-retired in 1968. Among many other honors, Barks was one of the three initial inductees into the Will Eisner Comic Awards Hall of Fame in 1987. (The other two were Jack Kirby and Will Eisner.) In 1991, Barks became the first Disney comic book artist to be recognized as a “Disney Legend,” a special award created by Disney “to acknowledge and honor the many individuals whose imagination, talents, and dreams have created the Disney magic.” He has been similarly honored in many other countries around the world.