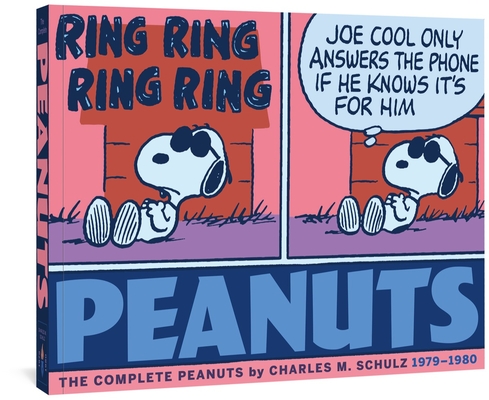 The third decade of the Peanuts newspaper strip kicks off with a number of classic storylines! The 1980s are here, which means Peppermint Patty is trying out new hairdos and Charlie Brown’s ill in the hospital (Or is he dead? Nobody’s told him yet!)

In this volume, Woodstock leads the Scout Troop on an eventful trek and Snoopy is still trying on identities left and right, including the “world-famous” surveyor, census taker, and riverboat gambler! In other extended stories, Snoopy launches an ill-fated airline (with Lucy as agent, Linus as luggage handler, and Marcie as flight attendant), and Peppermint Patty responds to a leaky fan by hiring a lawyer (there’s Snoopy again). Plus, one of the great, forgotten romances of Peanuts that will startle even long-time connoisseurs: Peppermint Patty and ... Pig Pen!

The Complete Peanuts is the publishing project that launched a renaissance in comic strip publishing and the only place Charles M. Schulz’s classic has ever been collected in its entirety. Featuring impeccable production values, this series presents the entire run in chronological order, dailies and Sundays, two years per volume, with supplementary materials.

Charles M. Schulz was born November 25, 1922, in Minneapolis. His destiny was foreshadowed when an uncle gave him, at the age of two days, the nickname Sparky (after the racehorse Spark Plug in the newspaper strip Barney Google). His ambition from a young age was to be a cartoonist and his first success was selling 17 cartoons to the Saturday Evening Post between 1948 and 1950. He also sold a weekly comic feature called Li'l Folks to the local St. Paul Pioneer Press. After writing and drawing the feature for two years, Schulz asked for a better location in the paper or for daily exposure, as well as a raise. When he was turned down on all three counts, he quit.

He started submitting strips to the newspaper syndicates and in the spring of 1950, United Feature Syndicate expressed interest in Li'l Folks. They bought the strip, renaming it Peanuts, a title Schulz always loathed. The first Peanuts daily appeared October 2, 1950; the first Sunday, January 6, 1952. Diagnosed with cancer, Schulz retired from Peanuts at the end of 1999. He died on February 13, 2000, the day before Valentine's Day-and the day before his last strip was published, having completed 17,897 daily and Sunday strips, each and every one fully written, drawn, and lettered entirely by his own hand — an unmatched achievement in comics.

Broadcaster Al Roker is the weather anchor on NBC's The Today Show and co-host of Wake Up with Al on The Weather Channel. He is the author of several books: Al Roker's Big Bad Book of Barbecue, Al Roker's Hassle-Free Holiday Cookbook, Big Shoes: In Celebration of Dads and Fatherhood, Don't Make Me Stop this Car: Adventures in Fatherhood, and two murder mysteries, The Morning Show Murders and The Midnight Show Murders.
A must-have addition to the collection of any fan of Snoopy, Charlie Brown, and the whole gang.