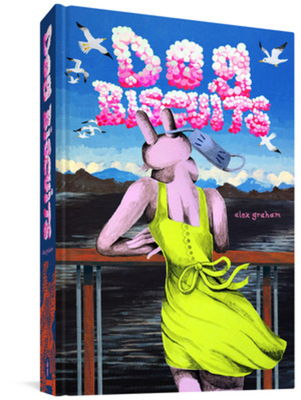 
It’s July 2020 in Seattle. Gussy struggles to keep his dog biscuit boutique afloat while a global pandemic rages unchecked. The loneliness of lockdown and social distancing drives his employee Rosie to betray her principles. Rosie’s roommate Hissy is at a personal crossroads. A love triangle emerges as they find themselves tangled in a web of police brutality, protests, drugs, dating apps and Covid chaos. Taking place over the course of just a few days, this is a snapshot of humanity — okay, animals — in crisis. Alex Graham’s pandemic-inspired graphic novel was initially serialized six panels at a time on Instagram during the lockdowns of 2020 and became one of the most talked about comics of the year; this hardcover edition will remain a timeless work long after the pandemic ends.

Alex Graham is a painter and cartoonist from Denver, Colorado, currently residing in Seattle.
Many artists re-channeled their creativity during the Covid-related lockdowns, but few managed it with as much fiery elan and grace as Graham.
— Publishers Weekly Starred Review

A love triangle in Seattle over the summer of 2020 reveals the intersection and impact of social media, woke culture, art, commerce, politics, and gender and class dynamics. ... Graham has created an occasionally scathing yet perceptive portrait of an especially fraught period in American history.
— Library Journal Starred Review

Dog Biscuits is a foundational text of what we can call pandemic comics, COVID comics, or quarantine comics. It reads strangely familiar in its most vital moments.

Dog Biscuits deftly shows the complexity and dynamics of the current moment, but with enough substance that it should prove a timeless testament to the complexity of living in uncontrollable times. As if there’s any other kind.

Dog Biscuits was, for me, the best piece of media produced by anybody in 2020. Alex really stepped up to the plate with this thing and had all of us that were tuned-in on the edge of our seats. Gussy and Rosie's doomed romance felt realer than any bullshit in the 'real world'.

Graham's "pandemic epic" actually reads even stronger in collected form than it did in daily single-page doses. The lockdown may be over, but this story nevertheless captures both where and who we are better than any other work in any medium.
— Four Color Apocalypse

While the main characters may be drawn as animals, they are painfully, imperfectly human. They may frustrate and annoy you. However, if you give them a chance, they’ll bring you to a resolution that is certainly fitting.
— New York Journal of Books