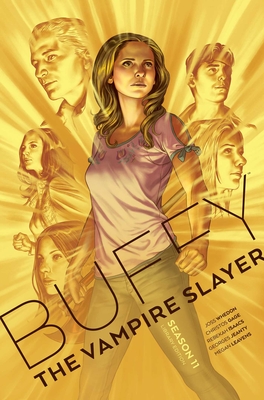 By Joss Whedon (Created by)

THE COMPLETE SEASON 11 COLLECTED TOGETHER FOR THE FIRST TIME Buffy and the Scoobies weren’t ready for this. When a tsunami and an enormous dragon devastate San Francisco, folks connected to the supernatural are blamed for causing the catastrophe and soon have restrictions placed on them in the name of safety. Buffy must choose sides, find a way for herself and her friends to survive, determine how the disaster happened, and not lose who she is in the process. But that’s only the beginning of their problems as a shocking conspiracy is revealed that threatens all supernatural creatures...and may lead straight to the highest ranks of the US government!

Whedon co-wrote for the Pixar animated film Toy Story (1995) (for which he was nominated for the Academy Award for Best Original Screenplay), wrote and directed the Firefly film continuation Serenity (2005), co-wrote and directed the Internet miniseries Dr. Horrible's Sing-Along Blog (2008), and co-wrote and produced the horror comedy film The Cabin in the Woods (2012). He wrote and directed the Marvel Cinematic Universe superhero films The Avengers (2012) and its sequel Avengers: Age of Ultron (2015), and also co-wrote the script for the DC Extended Universe superhero film Justice League (2017). He also served as director for Justice League on re-shoots, replacing Zack Snyder (who retained directorial credit).