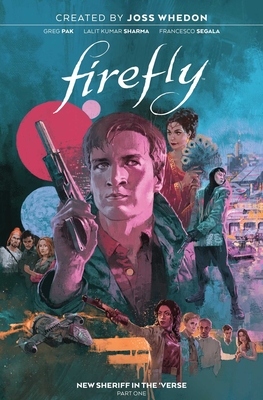 MEET SHERIFF MAL REYNOLDS. Soldier. Scoundrel. Maybe even hero. Mal Reynolds has been all these things, but now the captain of the spaceship Serenity has a new job - SHERRIFF. After the shocking conclusion of Mal’s journey with Boss Moon, Mal hands himself into the Alliance...but it turns out he’s not the one they want. The infamous Ma Reynolds - that’s Mal’s mom - is at the top of the Alliance’s Most Wanted, and if Mal doesn’t get to her first, the Alliance will! Kicking off a new Firefly epic, discover the secret history of Mal and his mother, and what that will mean for the rest of the ‘verse...and a new brewing war to end all wars from New York Times bestselling writer Greg Pak (Star Wars, X-Men), and artists Davide Gianfelice (Wolverine: Weapon X) and Lalit Kumar Sharma (Daredevil). Collects Firefly: The Outlaw Ma Reynolds #1 and Firefly #13-15
Greg Pak is a New York Times best-selling author behind the Planet Hulk storyline that inspired the hit film Thor: Ragnarok. He’s earned acclaimed with best-selling stories featuring all the biggest characters in comics - such as Superman, X-Men, James Bond, Star Wars and more - along with creating exciting new additions to those universes, like breakout character Amadeus Cho. Recently, Pak completed his popular original series Mech Cadet Yu at BOOM! Studios, which has earned accolades from the New York Public Library, YALSA and the Junior Library Guild. An official continuation of the popular cult favorite TV series Firefly.