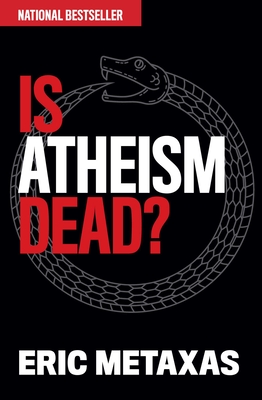 
On Our Shelves Now. Click on title for location specific availability.
Eric Metaxas, the author of the #1 bestseller Bonhoeffer: Pastor, Martyr, Prophet, Spy, now releases his hardcover bestseller in paperback.

Is Atheism Dead? is a highly entertaining, impressively wide-ranging, and decidedly provocative answer to that famous 1966 TIME cover that itself provocatively asked “Is God Dead?” In a voice that is by turns witty, muscular, and poetic, Metaxas echoes C.S. Lewis and G.K. Chesterton in cheerfully and logically making his case, along the way presenting breathtaking—and sometimes astonishing—new evidence and arguments against the idea of a Creatorless universe. Taken all together, he shows that much we have assumed about the biggest questions of human existence is in fact dramatically outdated — and is therefore in need of the most urgent reevaluation.
ERIC METAXAS is an author whose books have been translated into twenty-five languages. The host of a nationally syndicated radio show and the acclaimed conversation series Socrates in the City, he is a prominent cultural commentator whose work has appeared in the New York Times, the New Yorker, The Atlantic, and the Wall Street Journal. He lives with his family in New York City.