The Harlem of the South (Paperback) 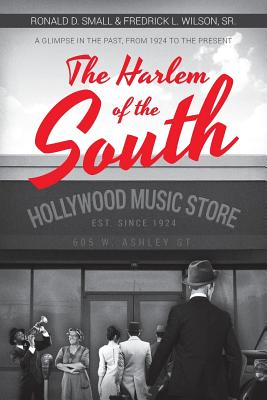 The Harlem of the South (Paperback)


Not on our shelves. Usually ships in 2-5 days.
Follow the amazing journey of a music store owner Joe Higdon, whose journey was filled with and joy also sadness; his walk in life led him in 1924 to open the legendary Hollywood Music Store in Jacksonville, Florida, in the historic African American community of Lavilla, which was incorporated as a city of its own in 1869 and was known as the "Harlem of the South." Hundreds came through the music store on their walk to fame and fortune, such as Count Basie, Duke Ellington, Louis Armstrong, Cab Calloway, Sarah "Sassy" Vaughn, Nat King Cole, Bill Daniels, Ray Charles, James Brown, The O'Jays, Al Green, Sam Cook, Sam and Dave, The Temptations, and many more. Joe Higdon had a business relationship with Ms. Clare White, then the daughter of Eartha M. M. White. He befriended gangster such as James "Charlie Edd" Craddock. One of Jacksonville's wealthiest and most prosperous African American businessman, he owned hotels, restaurants, a pawnshop, the Two Spot nightclub, and the famous whorehouse, the "Blue Chip Hotel" It was Joe Higdon who asked Eartha M. M. White to lease Charlie Edd the land to build the most popular club in the African American community, the "Two Spot." Charlie Edd employed ruthless gangsters who battled the Youngblood family in Nassau County to keep running moonshine up and down I-95. After Joe Higdon's death in 1958, the music store was inherited by Nathaniel D. Small, Joe's nephew, who continued the business for over forty years. This story is filled with events throughout the times. It walks you through from the life and time of Joe Higdon, the gangster Charlie Edd, Eartha M. M. White, and into the crime life of Ronald D. Small, how he inherited the Hollywood music store, to his life-changing experience with God, to this face-to-face encounter with Scarface, the drug lord in Miami, to finding himself face down on the floor surrounded by ten cops with guns pressed against his face, to his jaw-dropping courtroom jury trail. The only child of Nathaniel and Lillian Small, his struggle with crime was what led him home to the hall of God.