Michaels Desserts: Sweets for a Cause (Paperback) 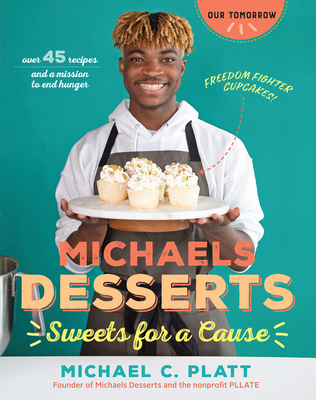 Michaels Desserts: Sweets for a Cause (Paperback)


On Our Shelves Now
Debut cookbook from Michael C. Platt, a teen baker, social entrepreneur, and food-justice advocate. Featuring 45+ dessert recipes for cupcakes, cookies, snacks and more, served up with valuable life lessons--Michaels Desserts goes beyond baking and triumphs amidst autobiographies and other inspirational books for black teen boys. Combining a fun cookbook with Michael's mission to bring awareness to food and poverty, Sweets for a Cause will quickly become a favorite teen baking book that builds skills in the kitchen, celebrates history, and inspires activism. The desserts recipes collection includes Michael's signature Freedom Fighter Cupcakes themed around figures from the history of civil rights and activism--Martin Luther King Jr., Grandpa Kitchen, Jos Andr's, Maya Angelou, Malala Yousafzai, Rubin "Hurricane" Carter, Harriet Tubman, and more--as well as chapters on pies, tarts, cakes, snacks, and breads. Each dessert features stunning photography, a list of ingredients, easy-to-do step-by-step instructions, and insightful tips from Michael that will make baking tons of fun. Truly a cookbook for all ages, whether baking with kids or wanting to support Michael's incredible mission, adding Michael's Desserts: Sweets for a Cause to your collection will bring hope to heart and tasty treats to your table. For teaching your teenager to bake--or for those whose kids cook already--Michael serves up sweet recipes for desserts and a drive towards social activism Paperback; 128 pages; 7.5 in W by 9.5 in H.
Michael C. Platt is on a mission to end food insecurity. A teen baker, social entrepreneur, and food-justice advocate, he's been baking since he was nine but has been interested in the challenges of inequality, food, and poverty since learning about the March on Washington at age six. Michael's teen baking business, Michaels Desserts, has a 1-for-1 model which donates a dessert to someone in need for every one sold. With this model, Michael has served hundreds of people. Michael appeared as one of the best kid bakers in the country in season 4 of Kids Baking Championship on Food Network and has been featured in Ted Talks, Good Morning America, CNN, Washington Post, People.com, Guideposts, the Rachael Ray Show, and more. He's a member of the Kashi Crew, a group of kid cooks who worked with Kashi to create a new line of cereals and snack bites called Kashi by Kids. He also appeared on BYU tv's feel-good show Operation Awesome, taking a look at how kids are changing the world every day in 2021. Michaels Desserts is his first cookbook. Visit him at michaelsdesserts.com and michaelcplatt.com.