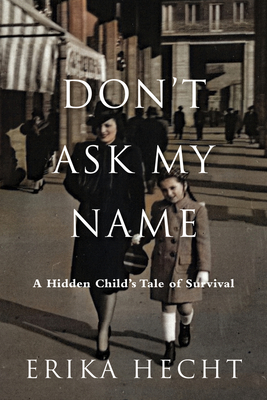 
Special Order - Subject to availability
Born Jewish in Hungary in the 1930s, little Erika became a “Hidden Child,” one of many Jewish children who were provided with false identities and survived the Second World War as Christians. The lies she had to tell and the secrets she was forced to keep sent her on a lifelong search for identity, until she is finally ready to tell her gripping true story.

Erika is only three when her divorced mother officially converts to Catholicism in hopes of protecting the family from the rising tide of antisemitism, but this is not enough to shield them from persecution, especially after the Germans occupy Hungary in the 1940s. Obtaining false identities and papers, they retreat to a small farming village where no one knows their true background, only to find themselves caught between the clashing German and Russian armies, both of which pose a constant threat to their lives and freedom. Now refugees in a fierce war zone, Erika and her family endure a harrowing struggle for survival that will forever leave its mark on her and her loved ones.

DON’T ASK MY NAME is a compelling memoir of a woman’s journey through one of the darkest chapters of the twentieth century.
Erika Hecht was born to a Jewish family in Budapest in 1934. With threat of Nazi occupation, her family converted to Catholicism, changed their identity, and went into hiding. After the war, they fled Communism in Hungary to Vienna. Erika attended medical school, married, moved to Canada, and became an interior designer. A quest for her true identity led her to other “hidden children.” She organized the “Child Survivors/Hidden Children of the Holocaust” conference in Montreal in 1994 and appeared in the Emmy-nominated documentary Remember Us: The Hungarian Hidden Children.
"Don’t Ask My Name is a harrowing war story and a subtle exploration of identity, reinvention, resilience and what makes us who we are." —Arianna Neumann, New York Times bestselling author of When Time Stopped