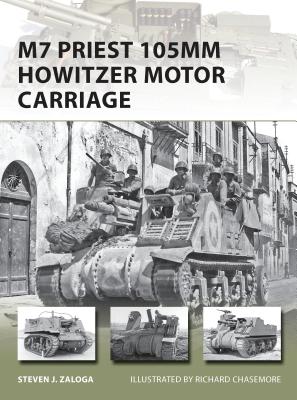 This is book number 201 in the New Vanguard series.

From El Alemein through Sicily, Italy, Normandy, the Ardennes, and Germany, the Allied M7 Priest self-propelled howitzer and its Canadian/British Sexton 25 pdr version became iconic. It was based on the ubiquitous Grant/Sherman tank and was the most widely manufactured vehicle of its type in World War II, being used by all major Allied armies including the US, British, Canadian and Free French forces. Besides covering the basic Priest, this book also deals with the major derivative including the British/Canadian Sexton with 25 pdr, and other US Sherman derivatives such as the M12 155mm GMC. The Priest has been widely kitted over the years including the recent Dragon kits (1/35), two Academy 1/35 kits, an older Italeri 1/35 kit (re-released by Tamiya), and numerous small scale offerings including Matchbox, Italeri, etc. and has been an evergreen modeling subject.
Steven J. Zaloga received his BA in History from Union College and his MA from Columbia University. He has worked as an analyst in the aerospace industry for four decades, covering missile systems and the international arms trade, and has served with the Institute for Defense Analyses, a federal think tank. He is the author of numerous books on military technology and history, including NVG 294 Allied Tanks in Normandy 1944 and NVG 283 American Guided Missiles of World War II. He currently lives in Maryland, USA.

Richard Chasemore completed a four-year course in technical illustration in 1992. Since then, he has worked on a wide variety of projects in publishing and advertising, using both traditional and digital media. He has lectured in airbrush techniques, and written six educational books on digital art. A long-standing contributor to the top-selling Star Wars Incredible Cross Sections series, his contribution has taken him to Skywalker Ranch in California to work with Lucasfilm's concept artists. Richard also enjoys music and is a co-founder of Superglider Records.