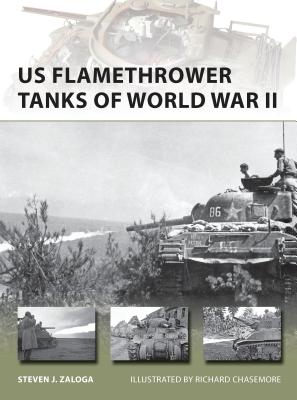 This is book number 203 in the New Vanguard series.

The US Army and Marine Corps experimented with a wide range of flame-thrower tanks through World War II in both the European and Pacific theaters. This book will examine early efforts in the US, the ill-fated attempt to adopted the British Crocodile for D-Day in Normandy, the adoption of the auxiliary E4-7 in the European Theater, and the use of British Crocodile flamethrower units in the ETO. Although the US Army deployment of flame-thrower tanks in the ETO was problematic at best, flamethrowers were much more widely used in the Pacific theater and became ubiquitous by 1945, including an entire Army flamethrower tank battalion on Okinawa in 1945, the largest single use of flamethrower tanks in World War II. This will cover the initial attempts at the use of auxiliary flamethrowers by both the US Army and Marine Corps in 1943, the standardized adoption of the Satan flamethrower tank by the Marines in 1944, the development of main gun flamethrowers by the Marines and US Army based on the POA-CWS (Pacific Area Operation-Chemical Warfare Section) designs, and the myriad other types tested in combat including the powerful LVT-4 design using Navy flamethrowers at Peleliu in 1944. Due to the extensive Japanese use of fortifications in the final year of the Pacific war, Flamethrower tanks became one of the most important solutions in American tactics.

Richard Chasemore completed a four-year course in technical illustration in 1992. Since then, he has worked on a wide variety of projects in publishing and advertising, using both traditional and digital media. He has lectured in airbrush techniques, and written six educational books on digital art. A long-standing contributor to the top-selling Star Wars Incredible Cross Sections series, his contribution has taken him to Skywalker Ranch in California to work with Lucasfilm's concept artists. Richard also enjoys music and is a co-founder of Superglider Records.
“Author Steve Zaloga has done his research as usual and come through with another excellent book. The book covers the development, testing, field use and modifications. The period photos are an excellent source of reference for modelers and the content really gives a view into all that went into getting successful units into operation.” —IPMS/USA