Dark Side of the Spoon: The Rock Cookbook (Paperback) 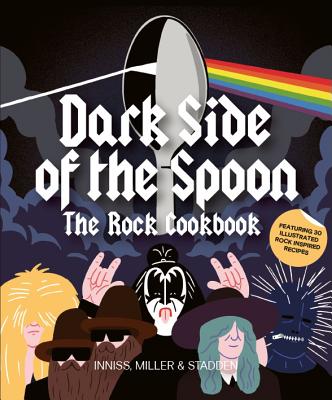 Dark Side of the Spoon: The Rock Cookbook (Paperback)


On Our Shelves Now. Click on title for location specific availability.
Dark Side of the Spoon: The Rock Cookbook features thirty recipes inspired by some of the most renowned rock acts of today and yesteryear. The dishes are accompanied by exclusive artworks from thirty top illustrators. Catering for cooks of all abilities and tastes, this book will help you master a wide range of appetizers, entrées, and desserts—including Smashing Pumpkin Pie, Fleetwood Mac and Cheese, and Primal Bream.

Dark Side of the Spoon celebrates the many humorous parallels between food and rock, and is a must-have for anyone with a love for cooking, music, or illustration, or indeed all three.
Joseph Inniss is a massive foodie who enjoys creating dishes with a twist.

Ralph Miller is currently working as a TV news producer and has previously worked as a columnist and journalist at a number of the UK's leading news publications.

Peter Stadden is a graphic designer and big music fan.