A People's History of the World: From the Stone Age to the New Millennium (Paperback) 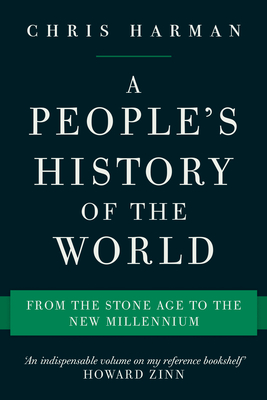 A People's History of the World: From the Stone Age to the New Millennium (Paperback)


Not on our shelves. Usually ships in 2-5 days.
A spiritual companion to A People’s History of the United States, this world history bestseller captures the broad sweep of human history from the perspective of struggling peoples throughout the ages.

You’ve never read a history of the world quite like this—a perfect gift for history lovers and fans of Howard Zinn.

From the earliest human societies to the Holy Roman Empire, from the Middle Ages to the Enlightenment, from the Industrial Revolution to the end of the twentieth century, Chris Harman provides a brilliant and comprehensive history of the human race. Eschewing the standard accounts of “Great Men,” of dates and kings, Harman offers a groundbreaking counter-history, a breathtaking sweep across the centuries in the tradition of “history from below.”

In a fiery narrative, he shows how ordinary men and women were involved in creating and changing society and how conflict between classes was often at the core of these developments. While many scholars see the victory of capitalism as now safely secured, Harman explains the rise and fall of societies and civilizations throughout the ages and demonstrates that history moves ever onward in every age. This magisterial study is essential reading for anyone interested in how society has changed and developed and the possibilities for further radical progress.
Chris Harman (1942–2009) was the editor of Socialist Worker and a leading member of the Socialist Workers Party in Britain. He wrote many articles, pamphlets and books including Class Struggles in Eastern Europe, Explaining the Crisis, Economics of the Madhouse, How Marxism Works and The Lost Revolution: Germany 1918 to 1923.
“I have had many people ask me if there is a book which does for world history what my book A People’s History of the United States does for this country. I always responded that I know of only one book that accomplishes this extremely difficult task, and that is Chris Harman’s A People’s History of the World. It is an indispensable volume on my reference bookshelf.”
—Howard Zinn

“The left … has few accounts which convey as well as this book does the broad sweep of human history.”
—Robin Blackburn, author of The Making of New World Slavery and The American Crucible