A Writer of Our Time: The Life and Work of John Berger (Paperback) 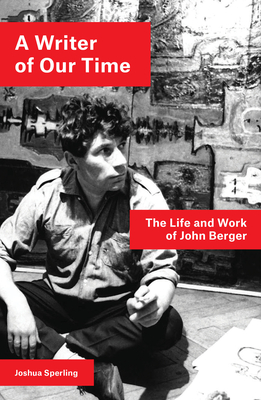 A Writer of Our Time: The Life and Work of John Berger (Paperback)


On Our Shelves Now. Click on title for location specific availability.
The first intellectual biography of the life and work of John Berger

John Berger was one of the most influential thinkers and writers of postwar Europe. As a novelist, he won the Booker prize in 1972, donating half his prize money to the Black Panthers. As a TV presenter, he changed the way we looked at art with Ways of Seeing. As a storyteller and political activist, he defended the rights and dignity of workers, migrants, and the oppressed around the world. “Far from dragging politics into art,” he wrote in 1953, “art has dragged me into politics.” He remained a revolutionary up to his death in January 2017.

Built around a series of watersheds, at once personal and historical, A Writer of Our Time traces Berger’s development from his roots as a postwar art student and polemicist in the Cold War battles of 1950s London, through the heady days of the 1960s—when the revolutions were not only political but sexual and artistic—to Berger’s reinvention as a rural storyteller and the long hangover that followed the rise and fall of the New Left.

Drawing on first-hand, unpublished interviews and archival sources only recently made available, Joshua Sperling digs beneath the moments of controversy to reveal a figure of remarkable complexity and resilience. The portrait that emerges is of a cultural innovator as celebrated as he was often misunderstood, and a writer increasingly driven as much by what he loved as by what he opposed. A Writer of Our Time brings the many faces of John Berger together, repatriating one of our great minds to the intellectual dramas of his and our time.

Joshua Sperling was born in New York City and grew up in California. His writing has appeared in the Brooklyn Rail, Guernica, Film Quarterly, Jump Cut and Bullett Magazine, among other publications. He received a PhD in Comparative Literature, Film and Media from Yale University and currently teaches at Oberlin College.

“This engaging intellectual biography traces Berger’s creative evolution, analyzes highlights from his vast output … and situates them within his empathetic Marxism.”
—New Yorker

“The remarkable John Berger has gotten the thoughtful, sensitive study he deserves. Joshua Sperling is at ease in every aspect of this extraordinarily multifaceted writer’s life: his art criticism, his fiction, his passionate political commitment, his immersion in the lives of Alpine villagers, and more. Lovers of Berger’s work will find a rich array of background here, and those who don’t yet know Berger will, I hope, be inspired to read him.”
—Adam Hochschild, author of King Leopold’s Ghost

“The author of G., A Seventh Man and Ways of Seeing was of course a lifelong controversialist and revolutionary. But, ultimately, he was a man ‘defined less by what he was against than by what he loved.’ Occasionally critical, always passionate, Joshua Sperling’s study of John Berger is as observant, rigorous, profound and as surprisingly entertaining as its subject.”
—David Edgar, author of Written on the Heart

“Berger’s talent for ‘seeing all sides’ of a thing, his incredible floating perspective, would have been worth less had he not used it to choose the right side.”
—Sarah Nicole Prickett, Bookforum

“Across the 90 years of John Berger’s life, he was by turns, and sometimes at the same time, an art critic and novelist, documentarian and screenwriter, farm laborer and historian, poet and polemicist … Does this mass of apparent contradictions add up to anything? The trick for any would-be biographer of John Berger is to find the unity in variety. Joshua Sperling is up to the task.”
—Robert Minto, Los Angeles Review of Books

“With sophistication and passion to match his subject, Sperling unfolds a chronological and thematic assessment of Berger … [A Writer of Our Time] is a lively and astute contribution to the writing on Berger, as well as to scholarship on the last 50 years of the cultural left in general.”
—Publishers Weekly

“A welcome intervention that does justice to the legacy of Berger’s thought and work which has been criminally underappreciated in Britain.”
—Morning Star

“Switches expertly from the political to the personal and back, mapping the highs and lows of an eventful—and sometimes turbulent—life.”
—Sunday Guardian

“Sperling provides context for the art and political movements of Berger’s years such that we now have a full context for the evolution of his ideas and style–and the remarkable variety of his sustained output … There is no question that Berger is one of the most influential arts and culture intellectuals of the past 50 years.”
—Ron Slate, On the Seawall

“An extraordinary and analytical biography of an extraordinary and influential life, A Writer of Our Time is an especially and unreservedly recommended addition to both community and academic library Contemporary Biography collections in general, and John Berger supplemental studies reading lists in particular.”
—Midwest Book Review