Not So Black and White: A History of Race from White Supremacy to Identity Politics (Hardcover) 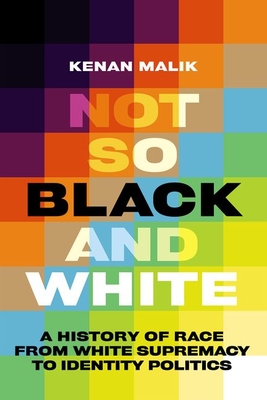 Not So Black and White: A History of Race from White Supremacy to Identity Politics (Hardcover)


Coming Soon - Preorder Now
Is white privilege real? Does American history begin in 1619 or 1776? Why has left-wing antisemitism grown? How racist is the working class? Who benefits most, when anti-racists speak in racial terms? These very different questions have all emerged from today's heated debates around race, identity and culture. The culture wars have generated ferocious argument, but little clarity. Not So Black and White offers that clarity by taking the long view, explaining the real origins of 'race' in Western thought, and tracing its path from those beginnings to today's fractious world. In doing so, the book upends many accepted views about race, identity, whiteness and privilege. Leading thinker Kenan Malik interweaves three narratives: the history of the idea of race, from the Enlightenment to the present; the historical and current relationship between race and class; and his account of how we created a world riven by identity politics. Through these histories, he challenges longstanding assumptions, revealing forgotten stories of a racialized working class, and questioning fashionable concepts like cultural appropriation. Not So Black and White is both a lucid history that rewrites the story of race and class, and an elegant polemic making an anti-racist case against the politics of identity.

Kenan Malik is a writer, lecturer, broadcaster and Observer columnist. He appears regularly on the BBC. His previous books include The Quest for a Moral Compass, and From Fatwa to Jihad, which was shortlisted for the Orwell Prize.