The White Album: Revolution, Politics & Recording: The Beatles and the World in 1968 (Hardcover) 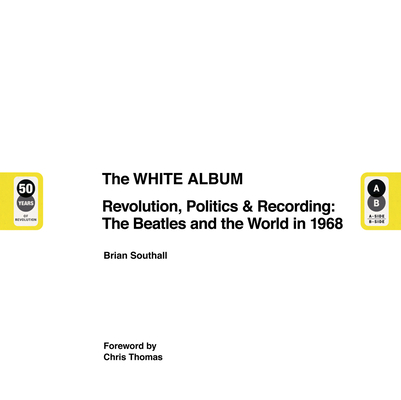 The White Album: Revolution, Politics & Recording: The Beatles and the World in 1968 (Hardcover)


On Our Shelves Now. Click on title for location specific availability.
From a writer and music industry insider who worked with The Beatles comes a comprehensive look at the band's only double album--and the world in which they recorded it. The Summer of Love--and many of the free, progressive ideas associated with it--was truly over by 1968, which saw disruption in the factories and revolution on the streets. This turmoil was reflected by The Beatles in the studio where, without the distraction of live performance, they adapted to life after Brian Epstein and with the addition of Yoko Ono. The result, officially called The Beatles but universally known as "The White Album," featured an eccentric, eclectic mixture of styles, techniques, and unconventional songs. This in-depth exploration of The Beatles' classic work has two parts: the A side is the definitive guide to the album, the recording, and the events surrounding it, along with interviews with the people involved. The B-side focuses on the world between 1967 and 1969, and how politics, technology, sports, and entertainment affected people's lives . . . and caused music to change its tune with the times.
Brian Southall began writing about pop music in the 1960s for a local newspaper before graduating to the likes of Melody Maker and Disc. He then pursued a 30-year career in the record business working for A&M, Tamla Motown, EMI, and Warner Music. His first book, Abbey Road: The Story of the World's Most Famous Recording Studios, was published in 1982, and he has also written The A-Z of Record Labels; the Sex Pistols 90 Days at EMI; Northern Songs (the story of The Beatles' music publishing); If You Don't Know Me By Now, the authorized story of Simply Red; Pop Goes to Court; The Rise & Fall of EMI, and more recently Sgt Pepper's Lonely Hearts Club Band.